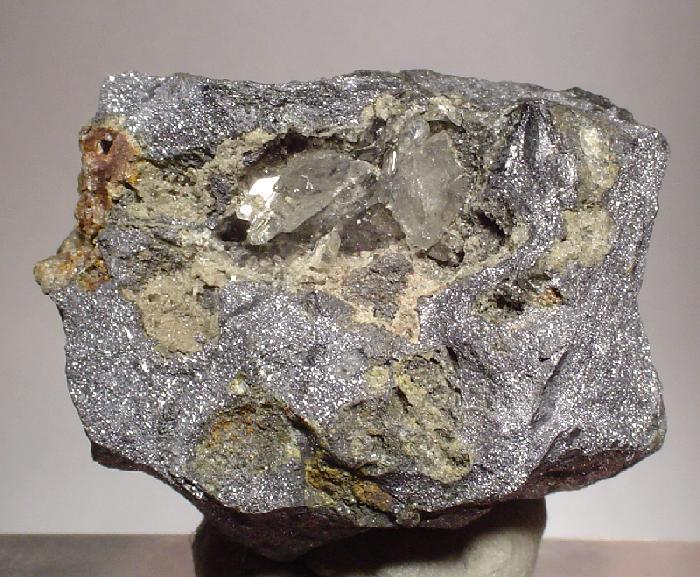 Lead was one of the earliest metals discovered by the human race and was in use by 3000 B.C. The ancient Romans used lead for making water pipes and lining baths, and the plumber who joins and mends pipes takes his name from the Latin word plumbum, meaning lead. Plumbum is also the origin of the terms ‘plumb bob‘ and ‘plumb line,’ used in surveying and also the chemical symbol for lead, Pb. In medieval times, lead came to be used for roofing, coffins, cisterns, tanks, and gutters, and for statues and ornaments. Another early use of lead was for the strips joining the pieces of coloured glass in church windows.

The dull grey colour of lead pipes and cables is caused by the oxygen of the air combining with the metal so as to form a very thin film or skin composed of an oxide of lead. Lead is not at all easily corroded or eaten away. Unlike iron and steel, it does not need protection by painting. Underneath the film, lead is a bright, shiny bluish-white metal. When you scrape it you notice how soft lead is. It is this softness that makes it easy to squeeze or roll lead into different shapes.

For winemakers in the Roman Empire, nothing but lead would do. When boiling crushed grapes, Roman vintners insisted on using lead pots or lead-lined copper kettles. “For, in the boiling,” wrote Roman winemaker Columella, “brazen vessels throw off copper rust which has a disagreeable flavour.” Lead’s sweet overtones, by contrast, were thought to add complementary flavours to wine and to food as well. The metal enhanced one-fifth of the 450 recipes in the Roman Apician Cookbook, a collection of first through fifth century recipes attributed to gastrophiles associated with Apicius, the famous Roman gourmet. From the Middle Ages on, people put lead acetate or “sugar of lead” into wine and other foods to make them sweeter. Lead touched many areas of Roman life. It made up pipes and dishes, cosmetics and coins, and paints. Eventually, as a host of mysterious maladies became more common, some Romans began to suspect a connection between the metal and these illnesses. But the culture’s habits never changed, and some historians believe that many among the Roman aristocracy suffered from lead poisoning.

Julius Caesar, for example, managed to father only one child, even though he enjoyed women as much as he enjoyed wine. His successor, Caesar Augustus, was reported to be completely sterile. Some scholars suggest that lead could have been the culprit for the condition of both men and a contributing factor to the fall of the Roman Empire. A form of lead intoxication known as saturnine gout takes its name from ancient Rome. Saturn was a demonic god, a gloomy and sluggish figure who ate his own children. The Romans noticed similarities between symptoms of this disorder and the irritable god, and named the disease after him. Scientists have since learned that while there are similarities between saturnine gout and primary gout, such as elevated blood uric acid levels, these are in fact two distinct diseases that could not have been cured.

Lead was also used widely for fashioning decorative objects. The oldest known lead-containing object made by human hands is a small statue found in Turkey, from 6,500 B.C. Egyptian Pharaohs between 3,000 and 4,000 B.C. used lead to glaze pottery. Lead was useful as well in construction. The Babylonians and the Assyrians used soldered lead sheets to fasten bolts and construct buildings. The Chinese used lead to make coins 4,000 years ago, as did the ancient Greeks and Romans. Early warriors made bullets out of it, and gladiators covered their fists with leaden knuckles.

Lead found new uses in the one of the fifteenth century’s greatest advancements, the printing press, where it was used to produce moveable type. During the same period, stained glass windows held together by lead frames decorated medieval churches, and architects used lead to seal spaces between stone blocks and to frame roof installations.